Joshua Seth - Mentalist "Inside Your Mind" 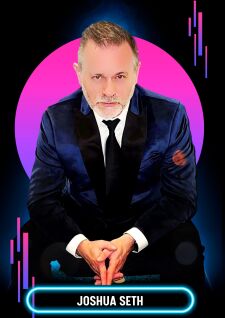 Joshua Seth is a mind-blowing mentalist and celebrity voice actor known to millions as the voice of some of the most popular anime characters of all time (Digimon, Akira, Spongebob).

Joshua has toured college campuses for over a decade, demonstrating the magic of our own minds with his high-energy shows that pack the house and keep audiences on the edge of their seats from start to finish.

His shows are so popular that he’s been nominated for BOTH the “Best Male Entertainer” AND “Best Live Variety Artist” Awards by Campus Activities Magazine and won the prestigious Magic Olympics at Hollywood's Magic Castle.