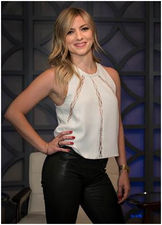 Annie Lederman is an L.A. based comedian currently making her mark on the comedy scene. In addition to touring nationally, she most recently was the co-host alongside Julian McCullough on WE HAVE ISSUES, which premiered September 18th on E!.

She previously starred in the E! pilot AFTER PARTY and was previously a panelist on CHELSEA LATELY. She also can be seen on MTV’s GIRL CODE, Comedy Central’s ADAM DEVINE’S HOUSE PARTY, and has gained a following for her social quips on the show.