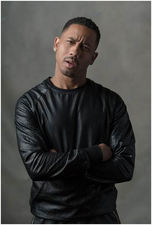 Brandon T. Jackson is a multifaceted young actor carving his own path in Hollywood. Earning critical praise, he started out in stand-up comedy and has evolved into a burgeoning young film and television star. He won Black Reel’s 2006 Best Breakthrough Performance award for his part in Fox Searchlight’s “Roll Bounce.” Daily Variety named him one of “10 Comics to Watch” and in 2011 Hollywood Reporter named him to their prestigious “35 under 35: Next Gen” list.

Brandon currently stars on and executive produces the Oxygen’s “Living With Funny.” In 2015, Brandon co-starred in the NBC series “Mr Robinson” opposite Craig Robinson premiering on NBC this August. He can presently be seen on the third season of Hulu’s original series “Deadbeat.” In 2014 viewers got a chance to see Brandon in a multi-episode guest starring role on Showtime’s critically acclaimed “Californication.”

Jackson starred opposite NBA basketball superstar Kevin Durant in “Thunderstruck”; and Martin Lawrence in the third incarnation of the highly profitable “Big Momma’s House” franchise released by Fox in 2011, in which he played Lawrence’s son and the two went undercover to solve a murder.

Jackson grew up in Detroit with seven siblings and parents who were both pastors. He is currently touring the country as a headlining comedian, where his humor straddles the fence between his youth of growing up in suburbia and the inner city. He now lives in Los Angeles.