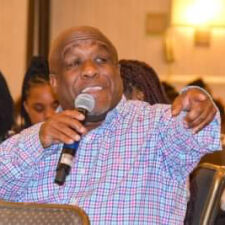 As a child he was diagnosed with Achondroplasia, a form of dwarfism. While it has inhibited him from doing some things in life, it has opened so many incredible doors. As a child all he wanted was to fit in, but all he did was stand out. Every school, every town and every outing was scary because he never knew what to expect or who would taunt him.

As he came into the adult years and found his true calling, he had some amazing opportunities. Chris had the chance to wrestle professionally with WWE as the “Little Boogeyman.” He was a radio personality for the “Doc and Johhny Morning Show,” and made debuts with Miss America 2003 and networks like ESPN, MTV, and BET. Chris had the privilege of working with the NBA teams Utah Jazz and Orlando Magic, as well as the NFL team the Minnesota Vikings.

In March of 2018, he published the book, Big Message, Short Story, depicting his life story .

For the past 20 years Chris has spoken to thousands of children all over the country trying to instill kindness and empathy and to embrace respect and believe that it is OK to be different.