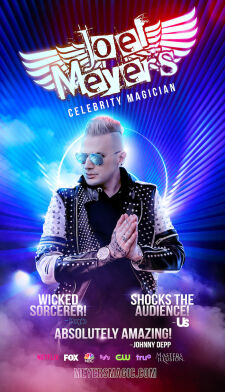 Numerous network TV appearances. Including America’s Got Talent, FakeOff on TruTV, Masters of Illusion and Penn & Teller Fool Us on the CW.
Featured in Newsweek, Us Weekly, and People Magazine. Private performances for celebrities from Brad Pitt and Johnny Depp to Jennifer Lopez.
Thousands of social media fans across the globe. Tours in over 20 countries and one of the most in demand performers in the world…Joel Meyers is a man who believes that nothing is impossible, and this attitude shines through in each and every one of his captivating performances.

Combining sleight of hand and original routines with larger than life personality and crowd winning charm, Joel specializes in taking audiences on what NBC calls “A roller coaster ride!” He’s an illusionist and a mentalist, a master of the stage, and a magician. He’s a performer who “will capture your imagination” (Newsweek), and he’ll win you over time and time again. Joel Meyers is simply a mystery; or as Al Pacino put it best, he’s “the coolest person ever.”