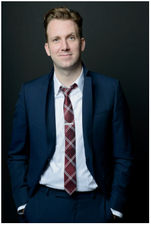 Jordan Klepper is a correspondent on "The Daily Show with Trevor Noah." He joined the Emmy winning "The Daily Show with Jon Stewart" in 2014 after years as a performer at the Upright Citizens Brigade Theatre in New York City. He co-created and co-starredin the UCB Comedy-produced pilot "Engaged," which was featured at the New York Television Festival.

Klepper has been seen on Comedy Central's "Night of Too Many Stars" and has worked as a writer and contributor on the Big Ten Network show "Friday Night Tailgate," MTV2's "Charlamagne & Friends" and as a contributing writer on HBO's "Ferrell Takes the Field." Together with his collaborator and wife, Laura Grey ("Klepper & Grey"), he created "Peepers" (2014), which was featured at SXSW and the Tribeca Film Festival, and the short film "TMI" (2012), which was a featured short at Slamdance.