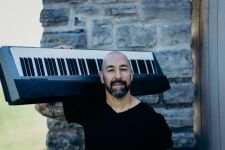 Joe Altier has been singing and pounding piano keys since age 5! Embracing everything from Frank Sinatra and Otis Redding to Garth Brooks and Metallica, his musicality and repertoire is simply astounding!

Joe's calling came when he assumed lead vocals for area hard rock band Brand New Sin. Three albums later, they headlined across the US & UK, were featured in the motion picture "School of Rock", and appeared on MTV and ESPN, when famed WWE wrestler, The Big Show, tapped Joe's soaring vocals for his infamous entrance song, "Crank It Up."

With over 5,000 events performed since 2008, Joe continues to play solo, record, and collaborate with his band to sold out shows all across the state. Joe was even recently invited to audition for NBC's 'The Voice' after taking home CNY's Best Male Vocalist award for SEVEN straight years!

Of course, none of this would be possible without so many loyal fans, but it also takes a really strong family and endless support from those behind the scenes! With a weekly podcast on K-ROCK, new songs covered daily on Facebook, and a dedicated Live stream on TWITCH, perhaps now more than ever, he's so much more than Just Joe!

Joe has taken the virtual world of Twitch by storm. He's appeared on the front page of Amazon music.