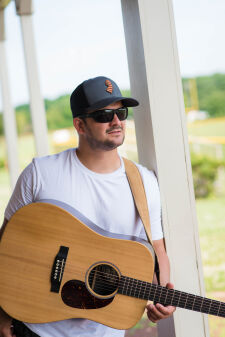 Kenny Curcio is a national touring singer-songwriter currently based in Nashville, TN. He began playing music at the young age of 12 and crafted his roots in Blues Rock, Country, and Folk. Curcio has opened for acts such as Randy Houser, Tyler Farr and Gary Allen, and he performed at the 2021 Barefoot Country Music Festival before Jon Pardi and Carrie Underwood. He has received radio airplay on NJ’s Cat Country 107.3 and Philadelphia's 93.3 WMMR & 104.5. Kenny has also received local and regional press along with extensive college radio airplay. Curcio's 2021 single "Us in the USA" received national recognition and has been featured on John Rich's (Big n Rich) Redneck Riviera website. In addition, Curcio placed 2nd in the 2021 Global Rising Song Contest for "Us in the USA", and was a featured artist in Americana Music Magazine. Curcio was also a Reverbnation featured artist in 2020.