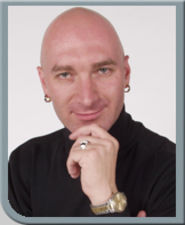 Born in Manchester, England, Mark began his professional career in 1989 working in comedy clubs and entertainment centers as a stage hypnotist and close-up magician.

After performing for various audiences, he decided it was time to look towards the stars and transform his show into something the world has never seen – a Vegas-caliber comedy stage hypnosis and illusion extravaganza. He created his unique blend of magic and hypnotism mixed with theatrical settings and state-of-the-art, high-tech theater technology that delighted audiences of all ages.

Venturing abroad, Mark Maverick is now one of the nation’s top hypnotists, performing over 200 shows each year. His unique approach demonstrates the powers of the human imagination in a hilarious and energized show that is thrilling and mesmerizing audiences all over America. Having worked on Andrew Lloyd Webber’s Starlight Express in London and on EFX with David Cassidy at the MGM Grand Hotel in Las Vegas, Mark has since developed his own production company and is also creating amazing larger scale shows such as Hypnotica.