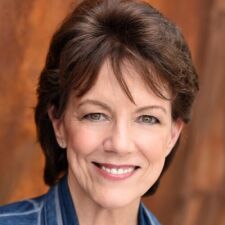 SPEAKING TOPICS:
Siri…How the Recordings Were Done: The Voice-over Business Where the Siri Voice Originated and How She Affected My Life and Future Technology
Basically, I’m a musician! The voice work, speaking, and acting came later. I was playing the piano by ear by the age of 4, took classical piano lessons for many years, and ended up singing in my first band, “Conglomerate” during my years at Brown University, from which I graduated in 1971. l went on to sing and play keyboards in clubs and restaurants in Atlanta GA, where I moved in 1972 and still live. I also did hundreds of commercial jingles (famously, Tillie the All Time Teller for the first successful ATM in the US), and sang backup vocals on tour with Burt Bacharach and Roy Orbison.

I got into voice-over work at Doppler Studios in Atlanta, when the voice actor hired for a particular commercial didn’t show up, and studio owner Pete Caldwell suggested I do the spot instead. Bam…l got a whole new career! I ended up doing spots for Coca Cola, IBM, Papa John’s Pizza, McDonald’s, AT&T, Wendy’s, Goodyear, Ford, Chiquita, etc., for both radio and TV. I also ended up working on camera for such clients as Morrison’s, Ford, GA Pacific, IBM, Kimberly Clark, etc.,

The music continued with The Interactive Band!, a private event band that my husband, guitar player Rick Hinkle, and I had for nearly 25 years. Presently, we’re involved in two bands, Boomers Gone Wild, which features rock and soul music from the 60’s and 70’s, and Canyon Ladies, featuring the music of 60’s singers/songwriters of Laurel Canyon, Joni Mitchell, Linda Ronstadt, Carole King, Bonnie Raitt, and Emmylou Harris.

Of course, Siri started a whole new chapter in my life. After I revealed myself as the original voice in 2013, I did hundreds of interviews, appeared on myriad TV shows (CNN, New Day, The Queen Latifah Show, To Tell the Truth, The Mariah Carey Christmas Special), and once again began a whole new career….doing speaker events!