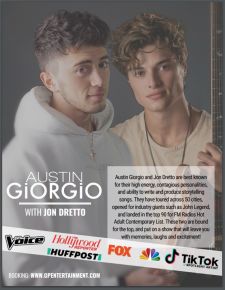 This is a 50-60 minute interactive event with YOUR students.

Raised in Rochester, NY and born to entertain, Austin Giorgio, a 22 year old Jazz Crooner has worked directly with Blake Shelton and Kelly Clarkson on NBC's The Voice. After spending five weeks with The Voice and performing on the live shows, Austin grew into the artist he is today. His unique sound pays homage to his idols Frank Sinatra and Dean Martin yet carries a new sonic soundscape that blends with today’s music production. Critics from Huffington Post have summed it up the best; "this sharp-suited kid is something else — charismatic, tons of fun, and a name that belongs in lights."

Austin Giorgio is redefining popular music through his unique incorporation of jazz and shows no signs of stopping anytime soon! With over 11 million views on live national television and over 40k followers on his social platforms, Austin is poised to break out in 2019.