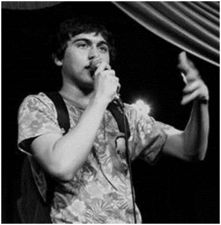 A Los Angeles based comedian, Brandon Wardell started doing stand-up comedy in Washington DC at 17, and after 4 years he moved to LA in 2014. Brandon Wardell is featured on Bob Odenkirk’s album, “Bob Odenkirk (feat. Brandon Wardell): Amateur Hour” and performed on his recent tour. This year, Brandon toured with Bo Burnham, opening up for him on his nation-wide tour, and was recently listed on Vulture’s “50 Comedians You Should Know in 2015.” In Los Angeles, he is a regular at shows including The Meltdown with Jonah and Kumail and Hot Tub with Kurt and Kristen, as well as venues like UCB and the Hollywood Improv. Brandon Wardell has performed at festivals including SXSW in Austin, the Bridgetown Comedy Festival in Portland, and the Bentzen Ball in DC.