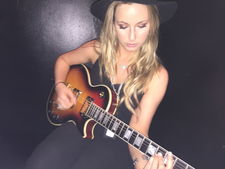 Castle Creek is comprised of front woman Kim Monroe and a changing cast of musicians as small as an acoustic duo or as large as a six piece band. With one EP and one full length disk each garnering critical acclaim, and three SAMMY awards under her belt Kim Monroe has consistently impressed audiences with her unique songwriting and powerful vocals. With another record in the works, Monroe attributes the leap she has made as a vocalist and songwriter to greater confidence in herself and a clearer vision of her musical direction.
Monroe has enjoyed collaborating with artists in the past, such as Goo Goo Dolls bassist Robby Takac and Blues Traveler's harmonica virtuoso John Popper. "I've been lucky to get the opportunity to work with some really wonderful, creative people in the industry and have truly enjoyed writing and performing my new songs, I feel that where I am musically now is home."

Although her material typically starts out in a folk vein, it usually progresses into the soul/ blues territory that best showcases Monroe’s stirring vocals. When asked about the record Monroe says, "The old record was a fun way to experiment with new sounds and really pin down where I fit musically. Live, I love to experiment all the time on stage, each show is its own unique experience."
With a tour calendar steadily filling and a new record in the works Monroe is excited for the future. "This next year will be a lot of work but I feel like there will be a lot of growth and opportunities that come with the new album. I am really looking forward to taking this next step musically and enjoying all that comes with it."

Monroe has also notably sang with the Zach Brown Band, played with John Fishman of Phish and opened for Robert Randolph and the Family Band, Jonny Lang, Blues Traveler and Devon Allman.