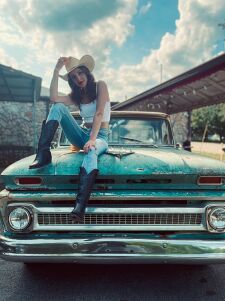 Country singer-songwriter J.Antonette received her start as a background singer for Melissa Etheridge and has since backed up Grammy Award-winner Michael Bolton, The Goo Goo Dolls among others. As an independent artist in her own right, J.Antonette has opened for celebrity country acts such as Jordan Davis and Tucker Beathard. She continues to achieve success as a multi-genre songwriter by placing music in popular TV shows as well as writing for other artists.

This multidimensional rooted rebel hails from a small rural town outside of Utica, New York and is the perfect split between old country values and big city mentality. Although she now resides in Nashville, Tennessee, she retains her east coast limitless spirit by living her life authentically and unapologetically with hopes to inspire others to do the same.

She’s been featured on radio stations such as Nash FM, iHeart, BIG FROG 104, and KISS-FM. Her 2019 single, “Something I Said” is a finalist in the prestigious John Lennon Songwriting Competition in the country genre.

Developing her charity, Bundle Up Nash, has been a fulfilling passion project for her. With hopes to use her platform to motivate positive change in her community, Bundle Up Nash works alongside incredible local charities to make a difference to those in need. To learn more please visit her Charity IG: @BundleUp_Nash

​​Her much anticipated single, Whtie Lines is out now! You can find her music on all streaming & downloading platforms!