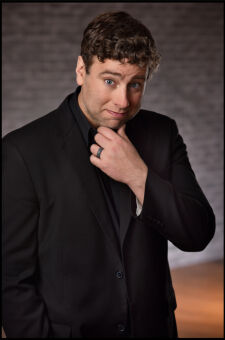 Jay Black has written a dozen produced movies, some for theater release and several for the
Hallmark and Lifetime Networks.

He’s also performed comedy at over 1,000 colleges, winning College Comedian of the Year
three times, and Best College Performer once.
Now, he’s taking those two areas of expertise and combining them into a brand new lecture
series call Just Write!

Jay started his professional career as a high school English teacher in a small town in New
Jersey. When he left teaching to pursue comedy and screenwriting, his wife made him promise
that they would never leave New Jersey.

So, they haven’t. Jay has built his entire career 90 minutes from New York and 3,000 miles
from Los Angeles. There’s nobody in the business who knows better than Jay how to
realistically build a career even while living miles and miles from the entertainment hubs of the country. This is what makes Jay uniquely qualiﬁed to help your students learn how to
successfully navigate the ﬁlm and television industry in their pursuits to be writers and/or
producers!

Just Write is a lecture designed to take a student deep into the areas of screenwriting that a class on structure never could.

Things like: line producing as you write (or why you should never have a kid tossing a ball to a dog), writing for the “distracted domestic” demographic, and how to make use of the one star you can aﬀord.

Beyond that Jay will cover the economics of an independently produced movie: how to get the
money to make it, and, even more importantly, how to earn the money back once you do.
And, most importantly, Jay will inspire your students to start writing and producing short ﬁlms seriously, right now, and not in some far oﬀ “future” when they “might” get to LA.
How will he do that? Two ways:


First, Jay will emphasize that he has built his entire career in a house that’s less than a mile from the house he grew up in.
And, second, Jay will oﬀer your students what no other lecturer on this subject can: a chance
to develop a project at Jay’s own production company.

All attendants of the Just Write lecture will have an opportunity to reach out to Jay, personally, with their ideas, and one or two lucky students will be chosen to develop their ideas further with Jay’s direct help.

The most important ﬁrst step in a career is knowing someone in the business… and every
single attendee of the Just Write lecture will have made that ﬁrst step.
If you have a communications department, ﬁlm school, or even just a creative writing class,
there is no better way to inspire your students to get writing than bringing Jay Black and the Just Write lecture to your school.