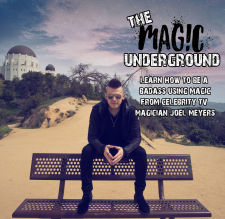 
Joel Meyers is your 2020 Magician of the Year in the college market and he is offering you a once in a lifetime opportunity to learn magic LIVE online!


With numerous network TV appearances. Including America’s Got Talent, FakeOff on TruTV, Masters of Illusion and Penn & Teller Fool Us on the CW.
Features in Newsweek, Us Weekly, and People Magazine. Private performances for celebrities from Brad Pitt and Johnny Depp to Jennifer Lopez.
Thousands of social media fans across the globe. Tours in over 20 countries and one of the most in demand performers in the world…Joel Meyers is truly a "celebrity magician."