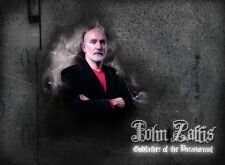 John Zaffis (Haunted Museum) Virtual Event live from John's Haunted Museum. John tells story's and shows haunted items from high profile cases. John has over forty years of experience studying and investigating the paranormal. He has had the opportunity to work for and with his aunt and uncle, Ed and Lorraine Warren. This sent John beyond looking for ghosts and hauntings and into studying demonology under the Warrens. This led into John's involvement with cases of possession and exorcism, which gave him the opportunity to work with prominent exorcists in this field, including Roman Catholic priests, monks, Buddhists, rabbis and ministers. John has assisted and worked with well-known exorcists Bishop Robert McKenna, Father Malachi Martin, Father Larry Elward, Jose Antonio Fortea and the Reverend Jun.