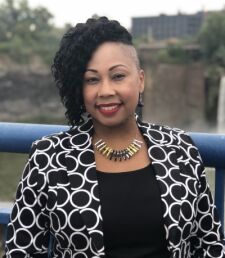 SPEAKING TOPICS:
Supporting First Generation College Students and Students of Color
Growing Your Nonprofit
Leveraging Support From Your Board
TEDxRochester – Pressure is a Privilege
EPIC Women
The Journey of a Teenage Mother
SYMBIS – Saving Your Marriage Before it Gets Started
Social Entrepreneurship: Providing Direction, Reshaping the World
Purpose Driven Girl: Cultivating Identity in Urban Girls
Married with her/his OUR Children
HONORS AND AWARDS:
Woman of Excellence, Rochester Business Journal
Forty under Forty Honoree, Rochester Business Journal
Woman of Distinction, Girls Scouts of Western New York
ATHENA Young Professional finalist, Women’s Council
Pioneer Award, City of Rochester
Honoree, BreakThru Magazine Gala
World Changer Award, All Women Rock
Woman to Watch, Democrat & Chronicle Newspaper
From a mother at age 14 to a CEO by age 34, LaShunda is no stranger to adversity and hard work. When she was a little girl, she dreamed of becoming a pediatrician or entrepreneur. Instead, when LaShunda was little more than a baby herself, she gave birth to her first child, a son. At that point, LaShunda could have become nothing more than a statistic. However, LaShunda is a dreamer and a doer. She became the first in her family to graduate college, earn a master’s degree, and she hopes to one day earn a doctorate. She accomplished all this while raising her son — and later her daughter — with her husband of more than 21 years.

Understanding the needs of teen parents, at age 24 LaShunda she started her own nonprofit organization, Successful Pathways, to serve teens who are pregnant or who are on the path to become pregnant. She served that organization for nearly a decade before moving on the help found and implement several other nonprofit organizations, always supporting and advocating for underserved populations. LaShunda most recently served as the President and CEO of Young Women’s College Prep Foundation, Inc., and is now “doing her life’s work” as Executive Director of Connected Communities.

LaShunda is a highly sought-after motivational speaker and workshop presenter. She is well versed in a range of topics, including but not limited to, nonprofit leadership, nonprofit startups, board development, small business startup, youth and family counseling, women empowerment, marriage counseling, teen pregnancy, and much more. LaShunda is also the lead author of a booked titled The Journey of a Teenage Mother and a certified SYMBIS marriage counselor.

LaShunda is blessed to share her life’s journey with her husband Moses and their two adult children, Branden and Myanna.