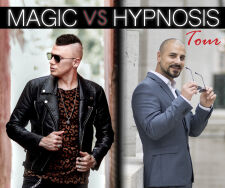 Combining two for the most well known performers in the College & University Market.

Joel Meyers (Celebrity Comedy Magician) & Eric Mina (Comedy Hypnosis) have individually been crushing at college and universities across the country. They now combine their shows. Joel will do his Comedy Magic and then Eric will do his Comedy Hypnosis after. Then they combine and do something very special that your students WILL NOT FORGET. Two HUGE personalities that students are drawn towards.

Completely interactive and fun for all who attend.