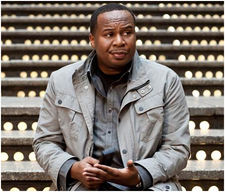 Roy Wood Jr. is a Correspondent on THE DAILY SHOW WITH TREVOR NOAH and has been described as the show’s “breakout star” and “the best part of The Daily Show’s premiere.” The thought-provoking comedy of Roy Wood Jr. crosses cultural lines and has entertained millions nationwide by stage, radio and television. Wood was a regular on the TBS hit comedy, SULLIVAN & SON, guest-starring as the likable sidekick and best friend of bar owner Steve Byrne, who returns to Pittsburgh to run his parent’s local pub.

Wood has recorded three nationally-released prank call CD’s: MY MOMMA MADE ME WEAR THIS (2003), Confessions of a High School Bench Warmer (2005) and I’LL SLAP YOU TO SLEEP! (2009) and released his comedy CD Things I Think, I Think in 2013.