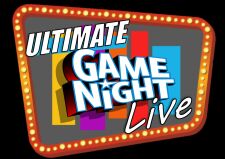 Here’s your chance to be part of all the fun and excitement of your favorite Classic TV Game Shows!

Ultimate Game Night Live brings the ULTIMATE Game Night (or day) to your College. We play all the classic TV Game Show games that everyone knows and loves... and some awesome new games too.

Ultimate Game Night Live is great for all Game Nights, both big and small, and can be customized to any size space, crowd, special theme or event type.

[According to his mother] Brandon, your host, is one of the most interesting people you'll ever meet. He has been working in the entertainment industry professionally since the age of 11. He's been in film, TV, on stage, in studio and behind the scenes of some of the biggest events (from the VMA's to the Grammy Awards). He has received honors from the Prime Time Emmy Awards, rubbed elbows with a sitting president, went to the Caribbean with Justin Timberlake, got beaten up by Macy Gray, learned to ride a 2-wheel bike from Alyssa Milano, and yes, it's all true... mostly. He can even read minds and communicate with dogs. His vast experience and knowledge of pointless facts makes him a ton of fun during any game night, and the ULTIMATE host!

20 Second Challenge (like Minute To Win It, but only shorter)

Kazoo Name That Tune (just what it sounds like)

You can choose which games you’d like for your Game Night, or make it Host’s Choice. If you’re not sure, we’re happy to help.