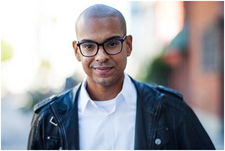 Currently a Staff Writer on HBO’s hit series, GIRLS, Yassir is an accomplished writer, TV personality, and stand-up comedian. This year, Yassir toured the country opening up for CHELSEA PERETTI on her ONE OF THE GREATS TOUR. In addition, Yassir recently appeared on Comedy Central’s “@midnight.”, served as a Judge on the MTV series “Snack Off,” as Host of Regal Cinema's “The Trailer”, and he’s currently a recurring guest on Pivot's “Take Part Live.”